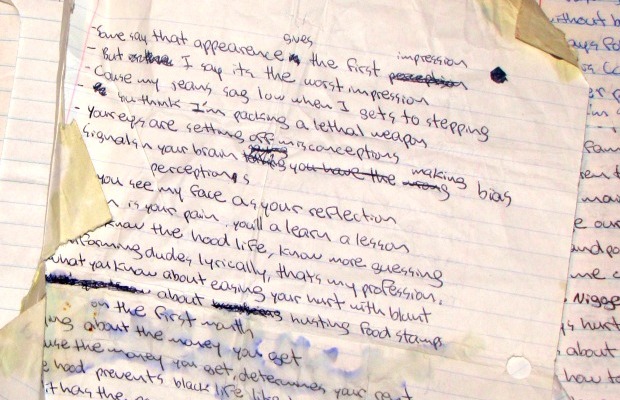 Production on the Overcome Mixtape has now begun. I’ve been sitting on this shit for months now, I’ve had the rough versions recorded for that long and just haven’t been arsed re-recording the vocals. I just copied out all the lyrics onto my rhyme book from the 7 tracks, and I’m about to fire up the Scarlett 2i2 and jump on the mic and record them all now, with this new laptop.

I’ve watched a few Hip Hop vocal mixing tutorials on You Tube, so I think I have a rough Idea of how to mix this shit. My producer Steve has upgraded his shit but lost all his plug-ins so I’m gonna give him a break and try mixing this all myself, in Ableton 9 Live Lite.

The tracklist is as follows:

All the tracks are produced by Insane Beatz, off a free beats package I got when I signed up to his site last year. The beats are quality, and now that I have them I may as well use them. It’d be madness to sit on this shit any longer, so I am getting it done now. Depending on how long the mixing takes, expect the project to drop for free on Band Camp, You Tube, Sound Cloud etc. within the next two weeks.

I am working on some album artwork too, which I will have ready for when the project drops.

After this project, I’ll be focusing more on local hip hop, with Irish production on the beats. Although that’s my aim, I’ll probably end up still releasing freestyles on popular instrumentals and jacking beats off You Tube too.

I’ve got an album in the works with Steve D called Psychosomatic, a Fresh Eire album entitled Irish Madmen, a project with Belgian Producer Jeroen Putteman, and a few remixes/freestyles coming too.

Ill be at the North West Hip Hop gig next Thursday too so be sure and get your ass down there to hear some of the best MCs in Ireland!

The Magic of Mushrooms

David Wilcock-Fall of the Cabal

Can You be Mentally Controlled?